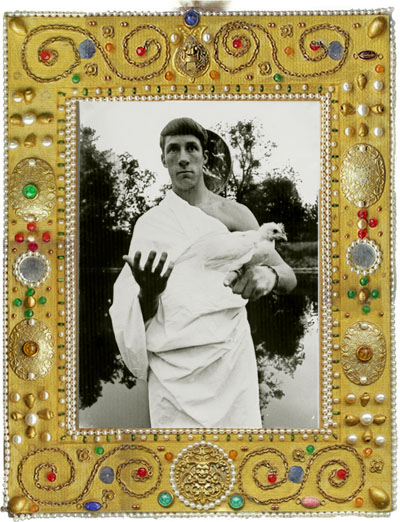 The greatest treasure of the Shire of Windy Meads is the Icon of St. Merrick, which has been passed down for many years from Seneschal to Seneschal. It shows St. Merrick or Meryk (whose halo is slipping a bit) by the miraculous waters of Putah Creek, holding one of the domestic fowl of whom he is patron. The folk of Windy Meads have enriched the frame with precious adornments according to their means and, er, taste.

The Legend of St. Merrick  says that long ago, on the banks of clear, sparkling Putah Creek, St. Merrick lived. He was a foundling, born goodness knows where, but an astonished farmer discovered him one day, left in a white blanket on the doorstep — of his chicken coop.

Bowing to the dictates of destiny, the farmer allowed the chickens to take the infant in. They cared for him as one of their own, brooding him to keep him warm, grooming him gently with their beaks, and protecting him from marauding coyotes. When he was old enough to walk, the farmer's ducks, too, took him under their wings. Thus St. Merrick was raised by domestic fowl, and this is the First Miracle of St. Merrick. (And therefore is he the patron of all barnyard fowl.)

When he grew to adulthood, St. Merrick established a refuge where he in his turn tenderly cared for any distressed chickens, ducks and other domestic fowl that came his way. For many years St. Merrick and the birds were happy together. But alas, a terrible plague came upon the birds, causing them great suffering. The tender heart of St. Merrick was moved to pity, and so St. Merrick prayed that he might take upon himself this plague, that his beloved birds might be spared, and behold, it was done. And that was the Second Miracle of St. Merrick.

And so St. Merrick suffered in his own body from the effects of this plague. His skin turned green, he ached, he was feverish, coughed up gunk and smelled bad. And by the clear, sparkling waters of Putah Creek, his beloved birds consoled him, bringing fresh water in their wings to cool his fevered brow, and nestling about him to keep him warm.

At last one day Merrick, weak and burning with fever, sought the cool, clear waters of Putah Creek that he might drink deeply of its sparkling water. But in his weakened state, at the brink of the stream he stumbled and fell in. Unable to rise, he lay there drowning, and with his last breath he cried out to God to preserve his beloved fowl forever.

But God took pity upon St. Merrick, and raised him up in health, transferring the plague from him into the waters of the Creek. And lo! the waters of Putah Creek became green and slimy and evil-smelling, and so they remain even unto this day. And that was the Third Miracle of St. Merrick.

In the college that later grew up on the banks of this creek, the memories of St. Merrick remain. The chief building of the college is called by a version of his name, Mrak Hall. And the birds still remember. Even today, you can go down to Putah Creek — clear and sparkling no more — and, if you bring bread to feed to the ducks in his memory, they will respond with their ancient cry, "Mraaak! Mraaak!"

About the Icon of St. Merrick

In 20th-century terms, of course, St. Merrick is completely fictitious. (And his tale pokes fun at a few local landmarks — describing Putah Creek as clear and sparkling always gets a laugh.)

However, in the SCA, the Legend of St. Merrick, the central image in this icon, and the Shire of Windy Meads are "ancient" history, since they date to the A.S. single-digits, pre-dating the Principality of Cynagua, in which Windy Meads now resides.

Before there was a Shire in Windy Meads, there was a College of St. Merrick, founded sometime before A.S. IX. Mark von den Falkenfels was one of the founders, and the original "discoverer" of the legend of St. Merrick. The College was disbanded when he left the area, and the Shire we know today was founded in A.S. XI (October 1977).

The origin of the central image of the icon is lost in the mists of time. We do not know who was the model for the image, or when it acquired its "trés riche" frame. Clearly the frame was patterned after the frames of 12th- and 13th-century reliquaries, such as the Stavelot Triptych or the reliquary of St. Francis from Limoges. (No, there is actually not any gold-painted macaroni involved. It's all junk jewelry.) 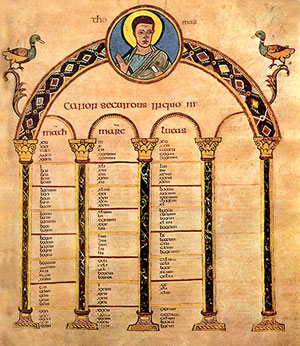 s our surprise in the twentieth anniversary year of Windy Meads when we discovered an ancient image that surely must be of St. Merrick. In the Trier Gospels, dated to the late 7th century, there is a canonical table bearing an image of a haloed saint at the top of its arched frame.  The haircut, the pained expression, and above all the presence of mallard ducks (although he is not actually holding them) clearly resemble our icon. Since the symbol that identifies St. Merrick is a chicken or duck (according to his legend), then obviously this must be St. Merrick, even though the 7th century scribe has labeled the picture "St. Thomas." (But what did HE know? :) We duly enlarged the image, moved the duck into St. Merrick's arms, and made a banner according to this ancient image.

(This version of the tale was noted by Lady Christian de Holacombe in the XXXVth year of the Society.)